In the heart of the city of Valencia, we find a singular building. It is a construction that has been in use for many years, but has been reconverted into a unique space.

Eight artists have intervened in those areas that are considered "passing through" to offer a new reading and present a new discourse: the idea of living with art in our daily lives.

From the entrance to the terrace, going up the stairs, we find works by these artists, selected to turn the way to the top of the houses into a walk that pursues, through interventions of various kinds (sculptures, mural painting, projections, etc.) a single objective: to take possession of the space to turn it into a different experience.

This project is available to visit by appointment. Contact us for more information. 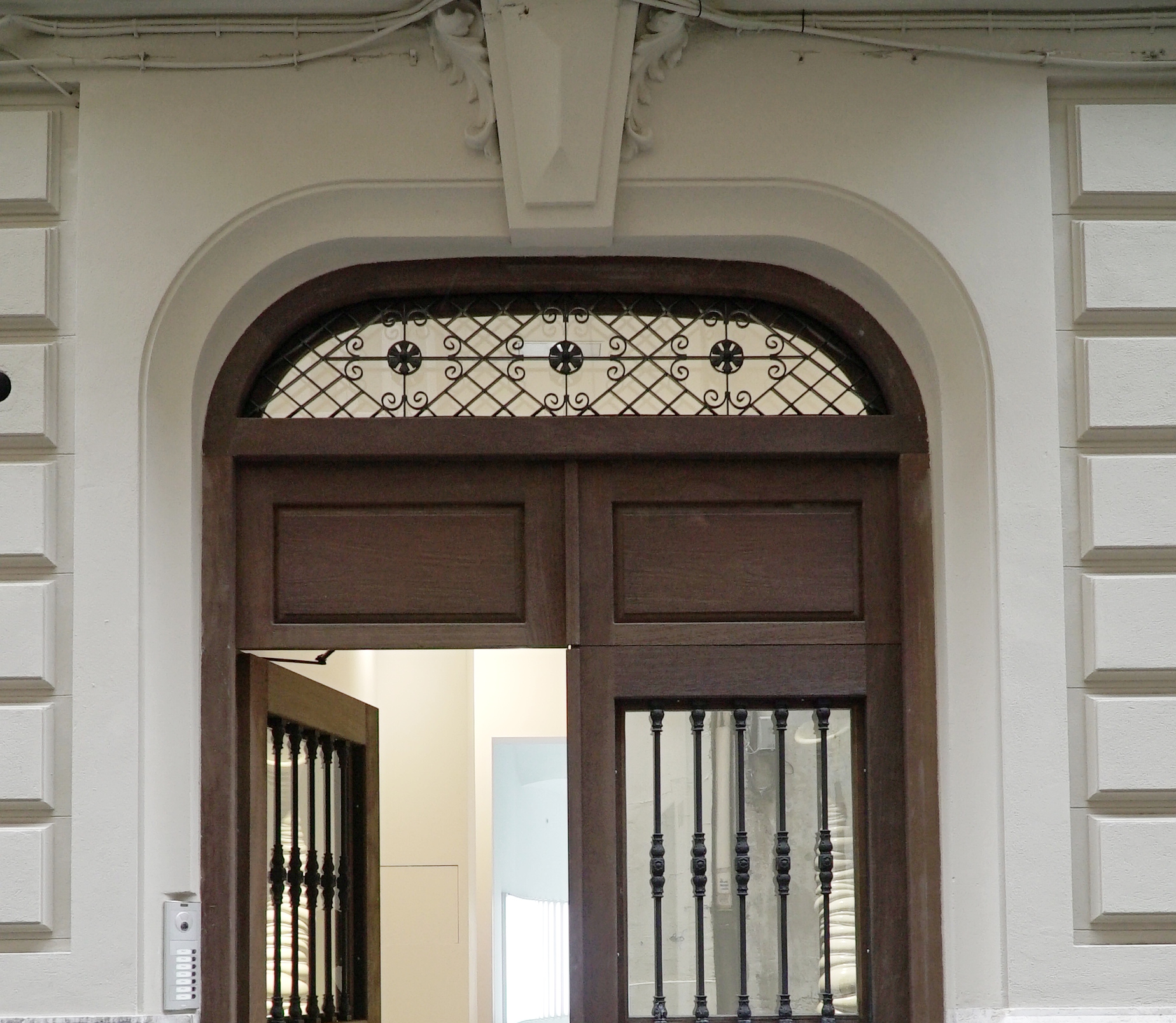 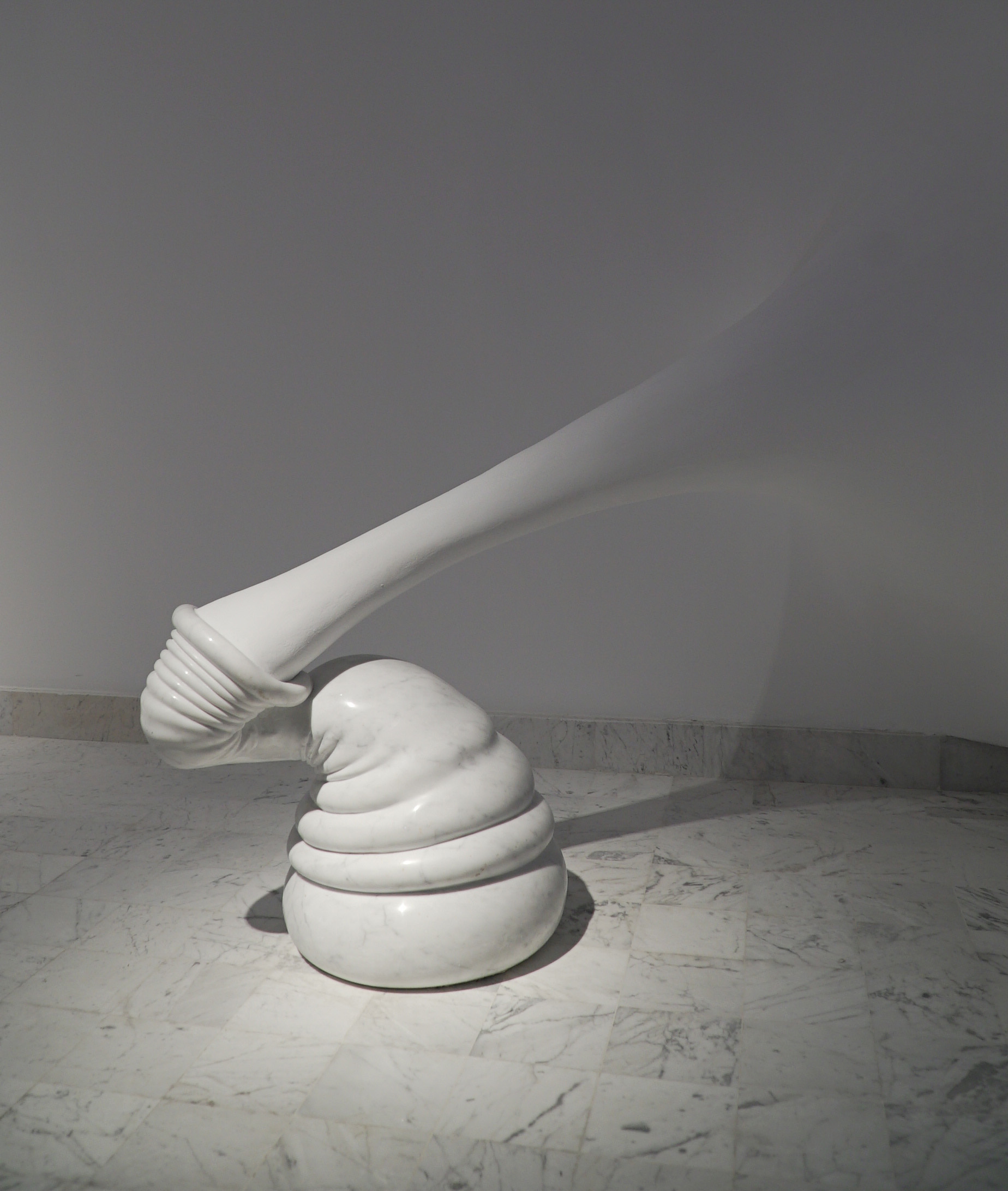 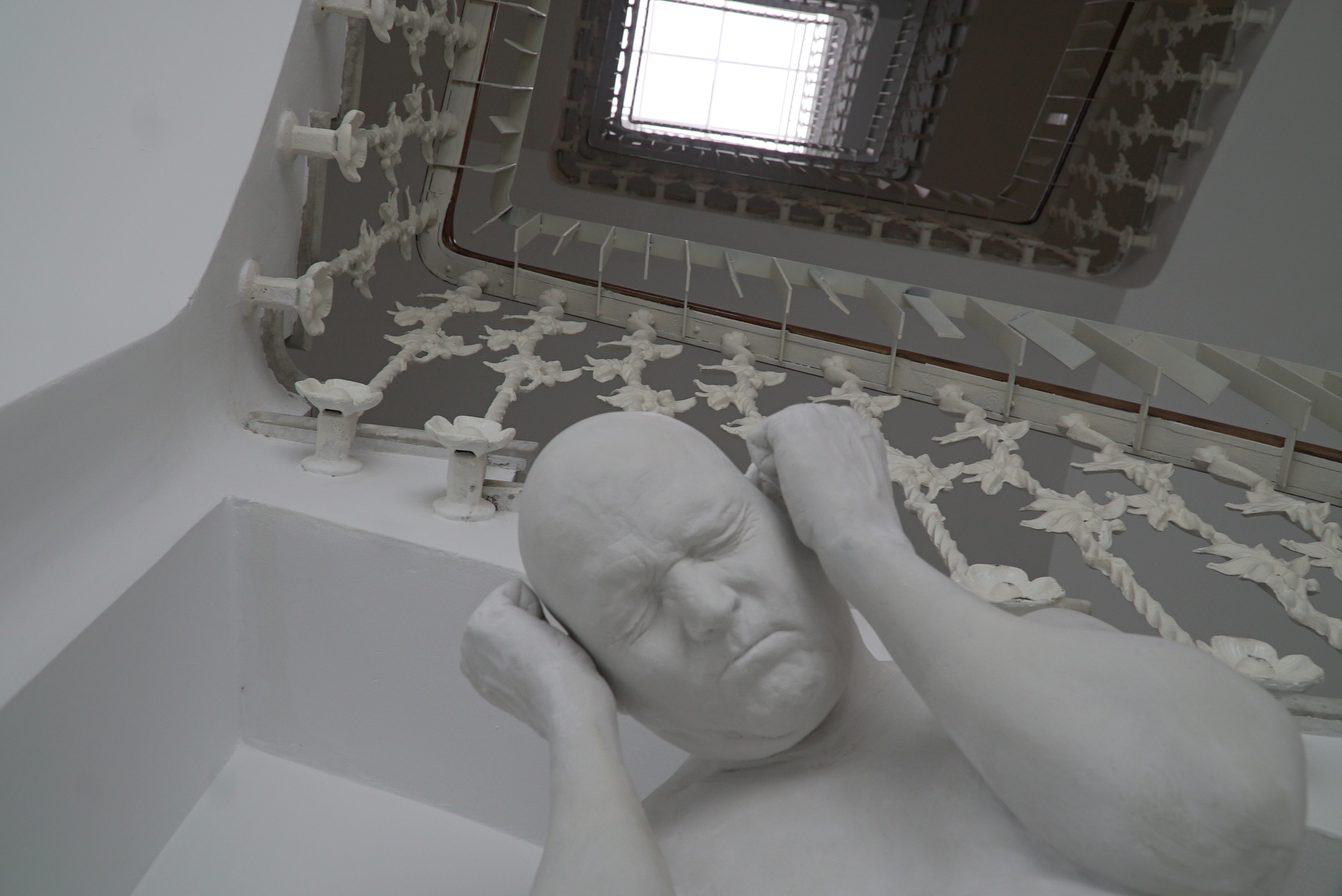 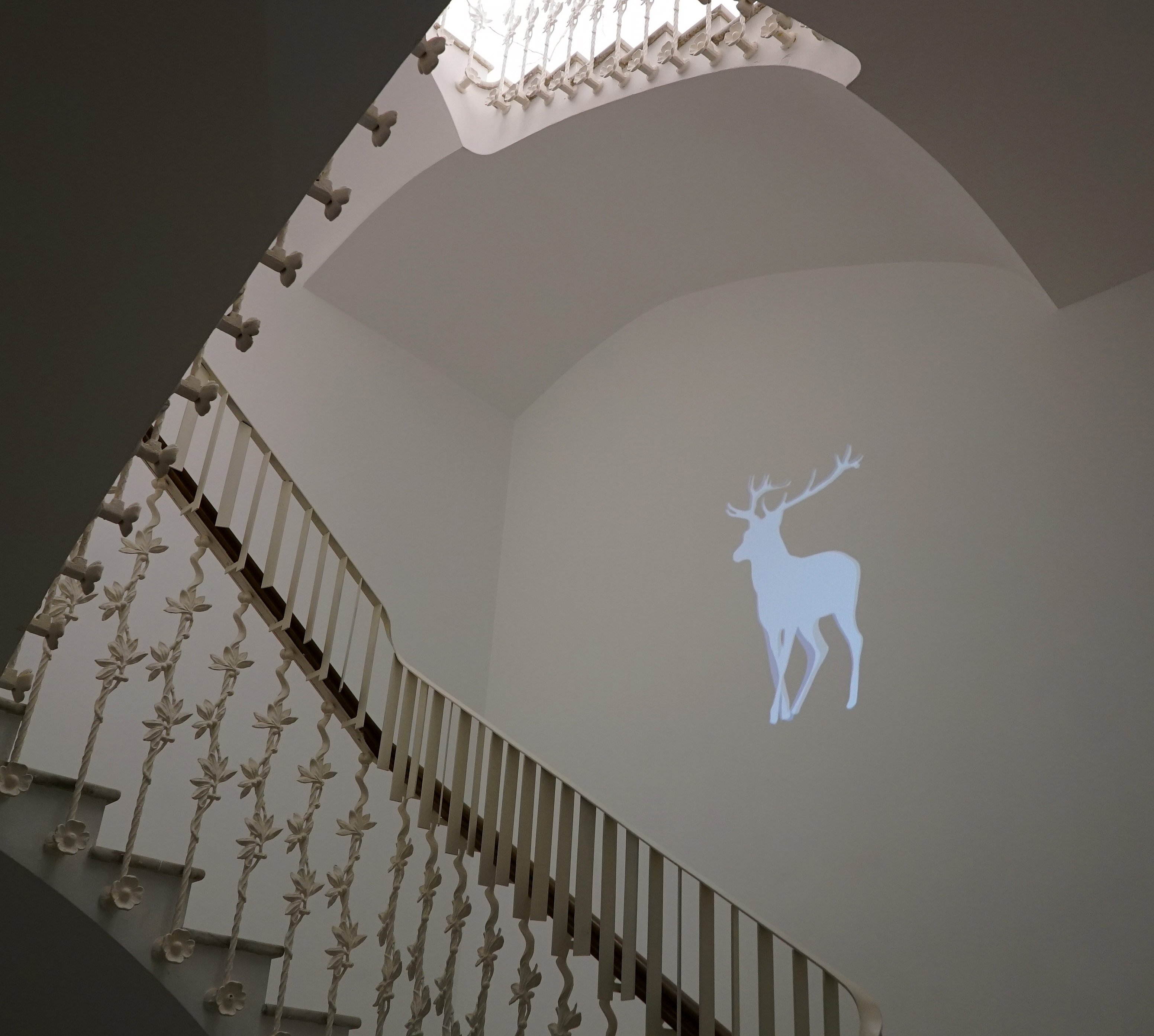 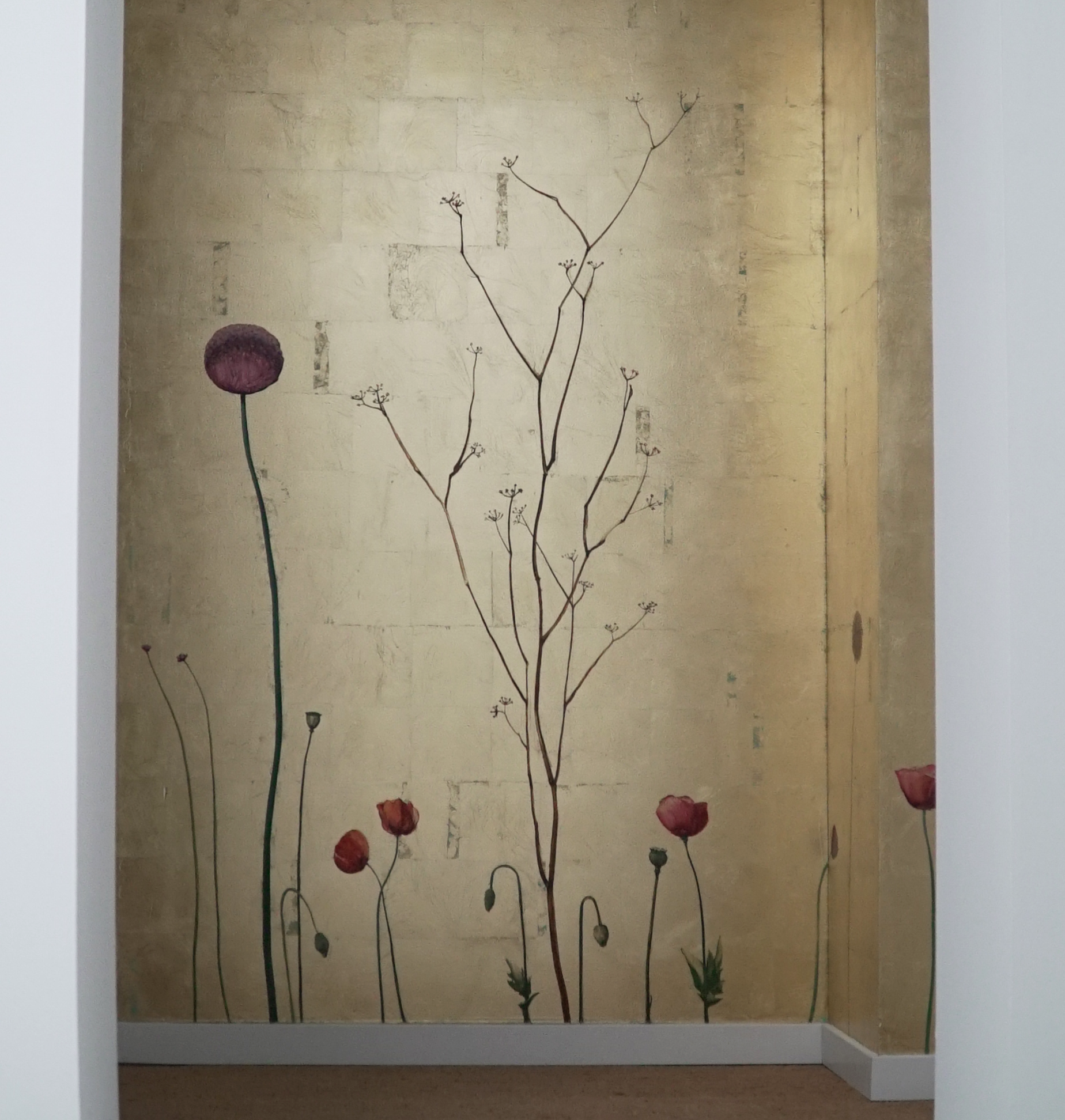 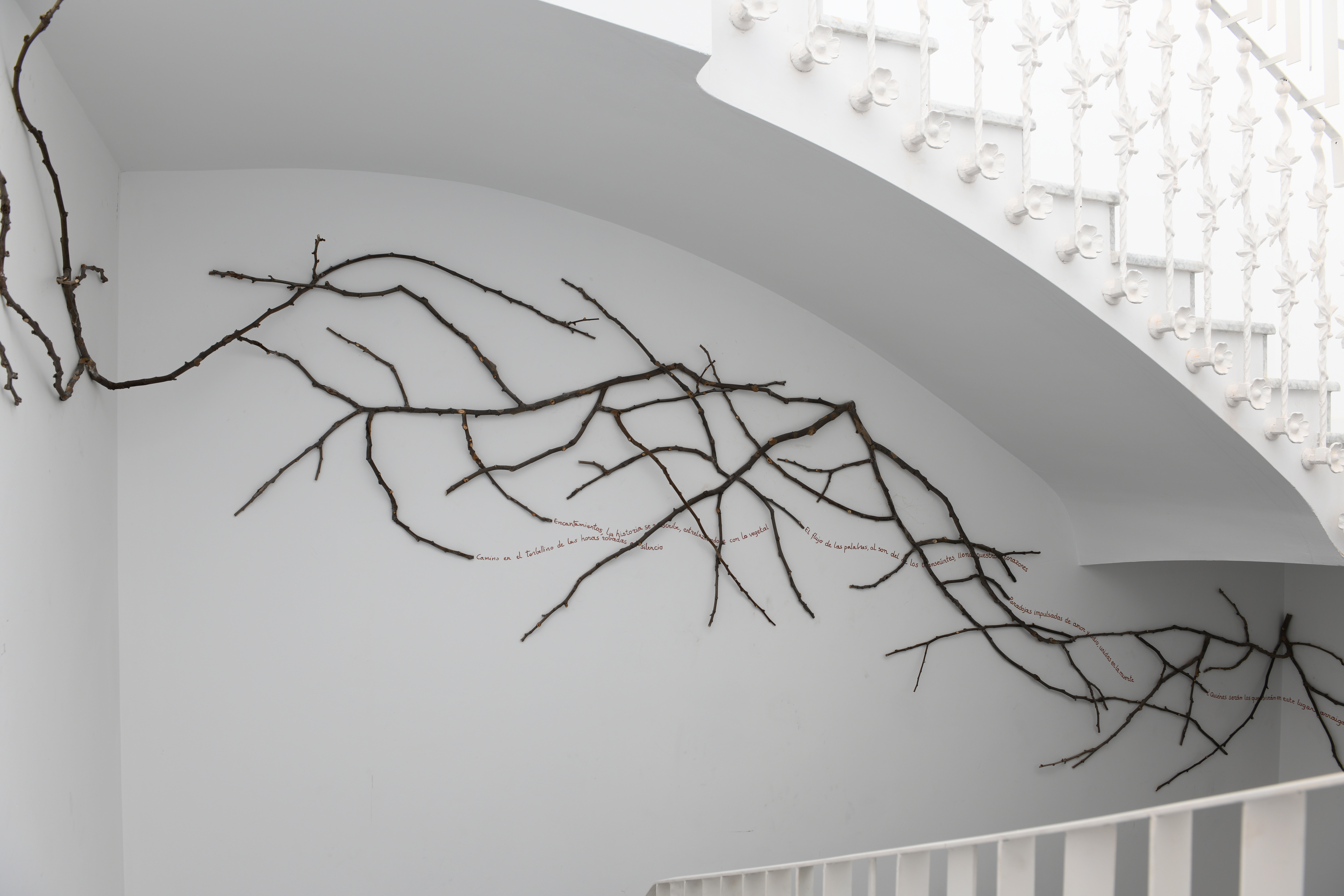 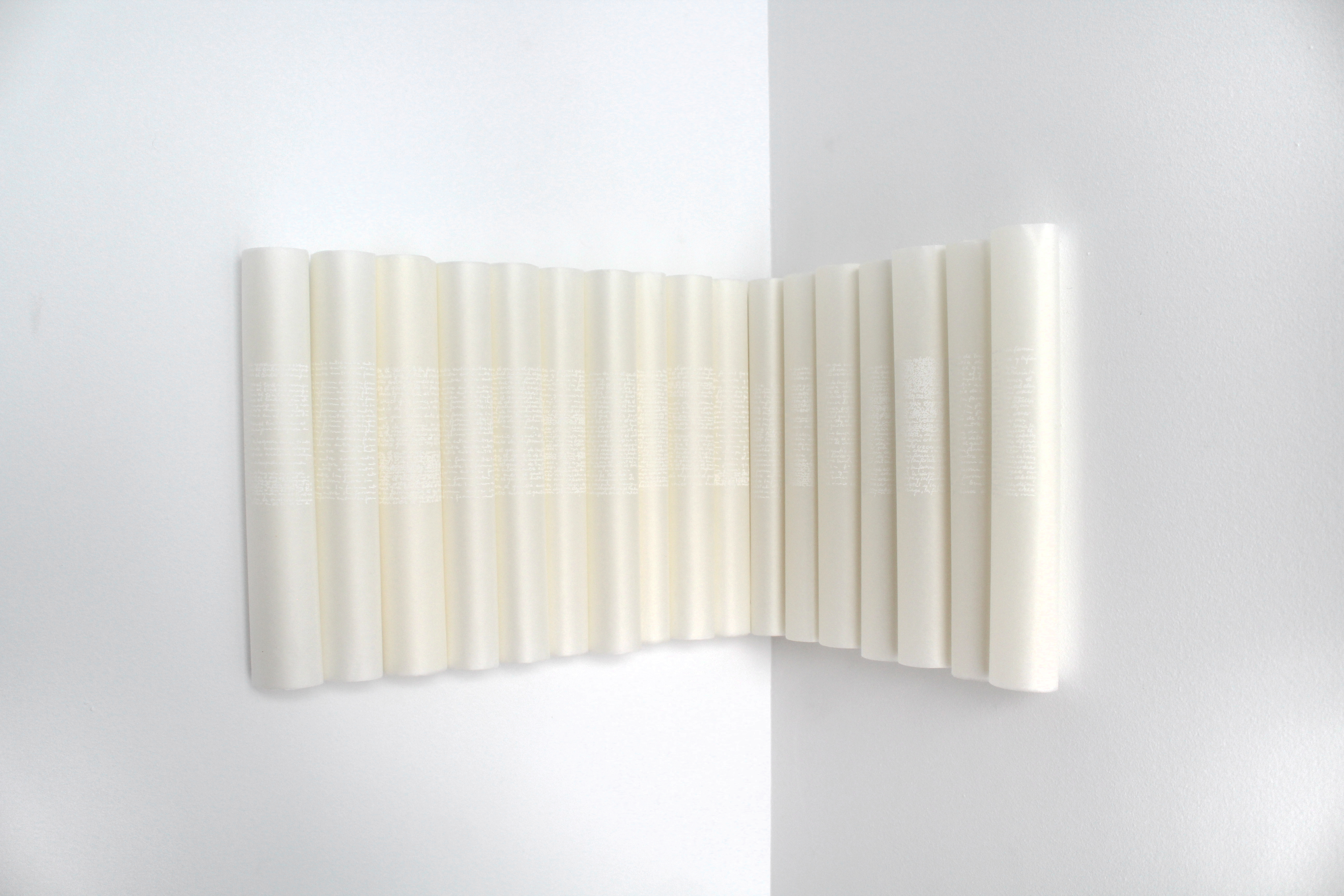 They are an artistic couple who maintain a close link with sculpture, making the main figure of their work to some peculiar organic forms baptized as Smörfs. These forms of endearing appearance contrast with the cold and rigid nature of the material they are made of, marble.

Inside our Gallery they have two exhibitions, as well as an open-air project, "Eclosion in Valencia 2014" carried out in the old bed of the Turia River, in the San Pio V Museum of Fine Arts and in different shops in the centre of Valencia.

He is one of the most important artists on the national scene. This is an artist who, although he starts from the most traditional disciplines such as sculpture or drawing, does not hesitate to incorporate new technologies to his work, always exploring the theme of the human body and leaving the interior of the artist himself exposed.

Bernardí is one of the artists with more exhibitions in the Ana Serratosa Gallery, creating different narratives in each of them.

He has an extensive artistic career that began in painting and was transformed into geometric light projections on natural elements.
Riera shows an early interest in the geometry of landscape and nature and with his work he has not stopped evolving technically around these two concepts. For that reason he is placed close to the Land-Art movement.
His work on light geometries was first shown in Valencia with the project carried out on the old course of the Turia river, "Alameda Llum 2012".

He combines university teaching and painting. For years, his work has been linked to the themes of art and nature.
His painting reflects on the value of the natural and the small by contributing gold or silver leaf to most of his pieces, and, together with botany, he creates pieces such as those in this exhibition.

At the same time, he carries out innovation and development projects at the Art and Environment research centre of the Polytechnic University of Valencia related to ecology and sustainability.

He began his artistic career in the sixties as a painter. In 1978, his research in the field of painting, pushed him to abandon painting to intervene directly in the landscape. Since then, the artist has worked exclusively with nature, making installations in situ that take into account the history of the place and the architecture that hosts them. The artist has exhibited around Europe in numerous institutional festivals creating large sculptures with only materials from nature.

Dominique Sintobin (1950) is a poet and artist. She works with Bob Verschueren on his creations, adding poetry or creations with charcoal.

His work is developed in the field of drawing in relation to other languages such as engraving, artist's books and ceramics.
His practice, based on literature and his approach to poetry, explores the concept of segno as a poetic memory of human experience. In her latest projects, she begins to explore sculpture in relation to place and sound from the tradition of oral poetry in the Middle East, which is present in her for cultural and biographical reasons, thus opening up a new space of times, cadences and silences that are essential to her work.

“To intervene in a space is a way of inhabiting it, a way of giving it life in order to produce new meanings within it. It implies therefore to coexist with it in intimate complicity, changing necessarily its value and sense during this coexistence. For this reason, everyone who works on the creation of spaces is usually guided by some preferred definition of what it means to Inhabit.”

“Fascination and stupefaction are thus brought together at the beginning of the journey, a feeling that coincides with that perplexity that Maimonides admired so much: far from being negative, it is a necessity, a stimulus to ask questions and induce thought. In certainty there is no progress or innovation, while perplexity moves us to leave established reality, becoming the path to enlightenment. Then there is only one option left: to begin an ascent that could be understood as an exercise in desire, one of the most insinuating words in our lexicon and which moves this universe.”

Venske & Spänle’s sculptures interact with the space and the architecture where they are shown. During the exhibition “Valencia en reojos” at the Gallery Ana Serratosa in 2016 they playfully take on valencian sights, such as “Miguelete” or “Murcielago” the mascot of the city of Valencia also seen in Cabillers Street.

In the city center of Valencia, the sculptures known as “Smörfs” populate one appartement and explore the edges of a dividing wall sitespecifically. Since the artistic enviroment of the house seems to be a growing forest due to the works of several different artists, Venske & Spänle’s marble sculptures greet the visitor entering the building on the ground floor.

They incorporate the surfaces of the architecture and transform them into chewy organic mass. On the top floor of the building the marble stairs come to live and seem to grow onto the wall to form their own enviroment as a blossoming pure white flower. 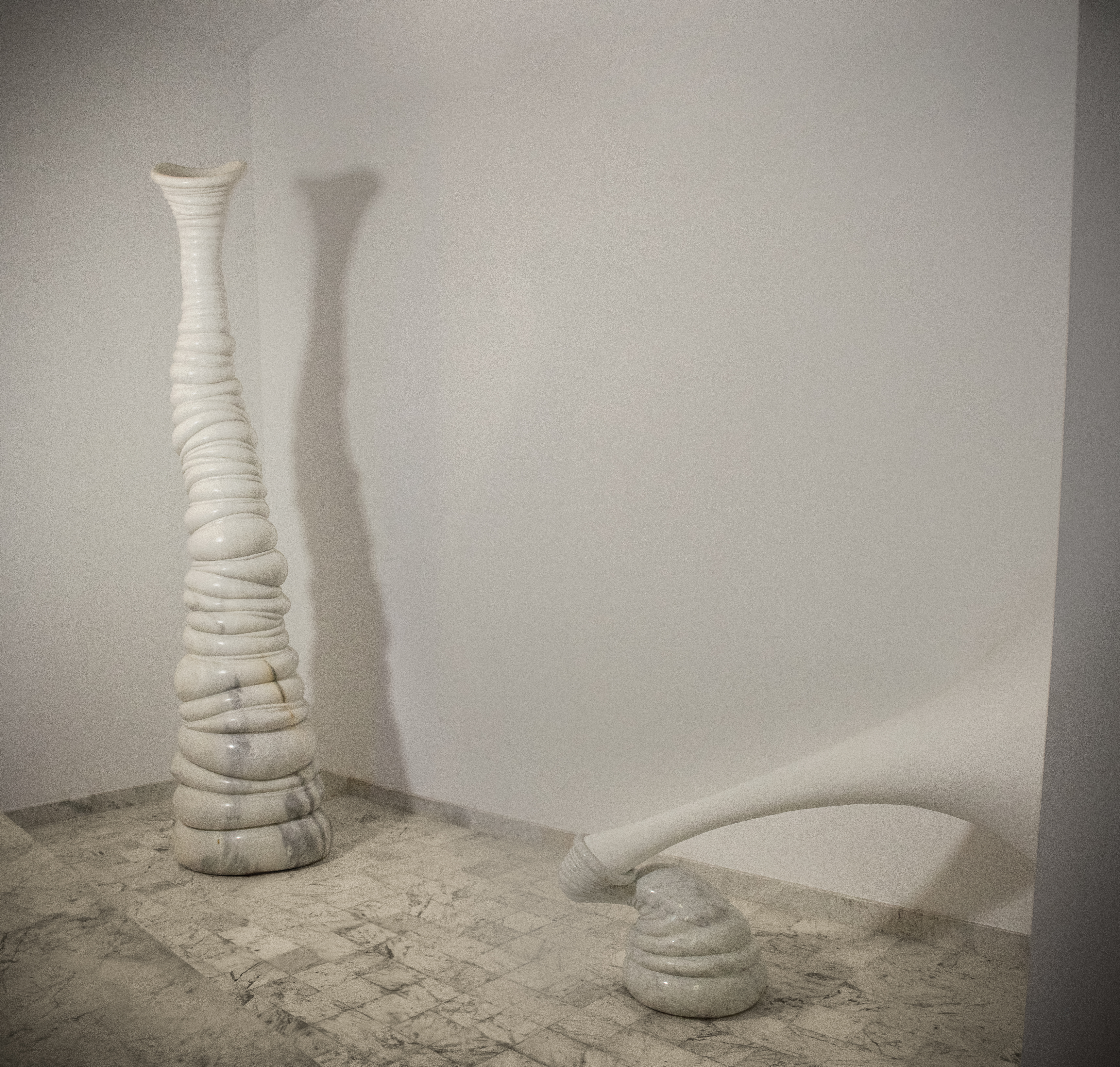 A sculpture is not a thing. Nor an image. In any case, a sculpture would be the presence of an absence. This white, voluminous figure, made of piled up meat, apparently heavy, without texture and deaf is not there. It is not even expected.

Nor is there a clueless deer circling in a claustrophobic void, no branches, no words, much less gold leaf. Neither tablets in Arabic, nor aphonic voices in Farsi. Nothing. 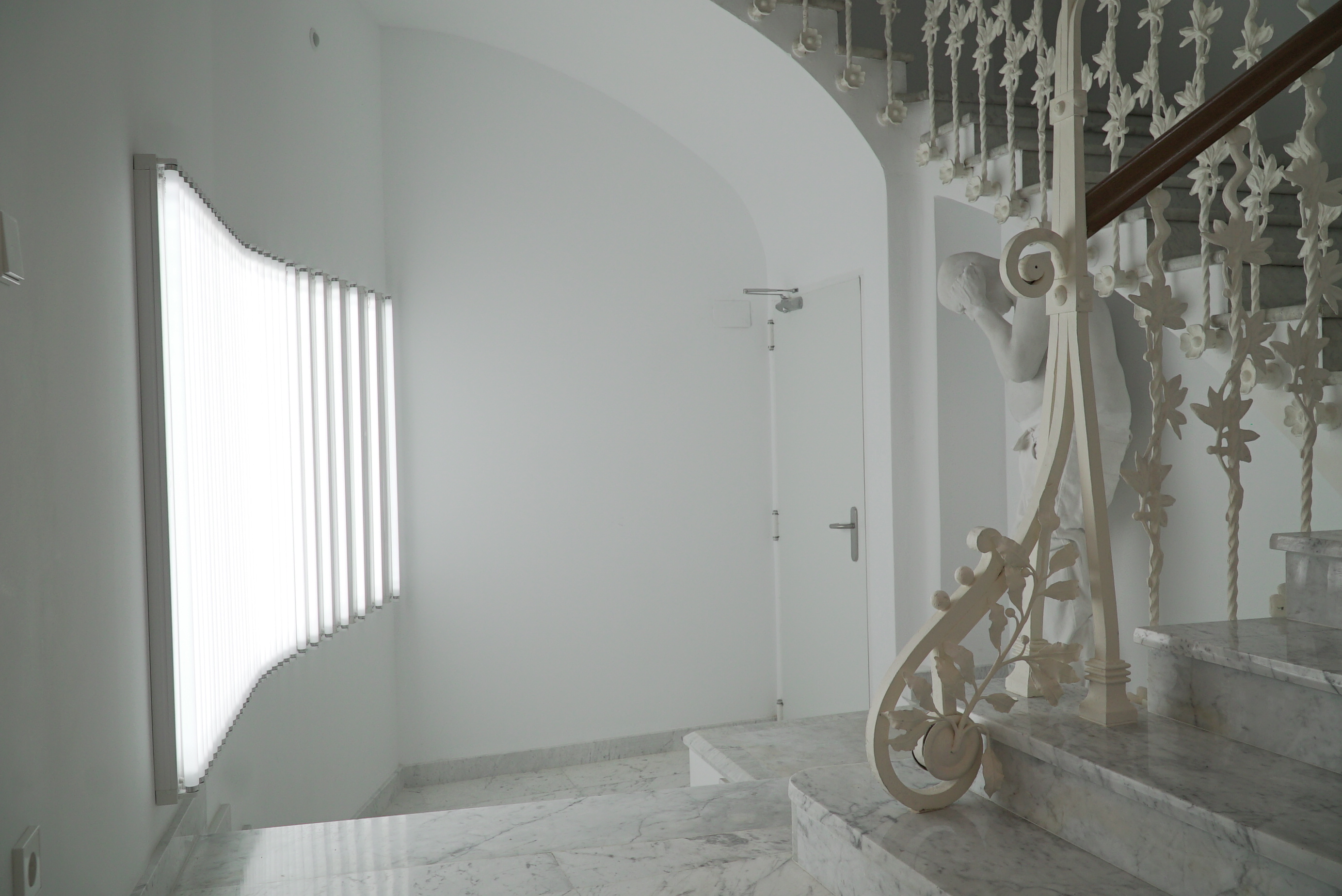 Deer sequences have been extracted by a slow process of rotoscoping from images recorded by Javier Riera of animals in the wild. The aim of this process is to make the animal present through the naturalness of the image.

In a time before any concept of architecture, primitive man painted animals on the walls and ceilings of caves, in what has been interpreted as an act of invocation, not exempt from admiration*, and whose ultimate purpose could be the hunting of the animal as a basic means of survival.

This project seeks to repeat, with today’s technology, that primitive act in order to propose a new invocation model invocation, which no longer seeks to capture the animal but to approach and understand its essential qualities and, finally, the need for its existence. Repeat to revise, in this case, our basic concept of survival in relation to nature.

Often present in prehistoric paintings, the deer acquires throughout history a strong symbolism, which relates it to the tree, the mystique of light and concepts of cyclical renewal. It has been linked, by authors such as Cirlot, to the Tree of Life by the similarity of its antlers to the tree branches and is a symbol of the spirit for mystics such as St. John of the Cross.

Since ancient times the symbolic spectrum of the deer has been a bridge between the instinctive and the spiritual, the earth and the sky. Its presence on this staircase is linked to the poetic ascensions that use the staircase as a metaphor.

*Various studies on prehistoric drawings seem to conclude that primitive man represents himself as an inferior being to the animals, which he admires. Apparently the development of consciousness brought about a feeling of shame or guilt at the loss of unity with nature, which is surely at the origin of the biblical myth of original sin. 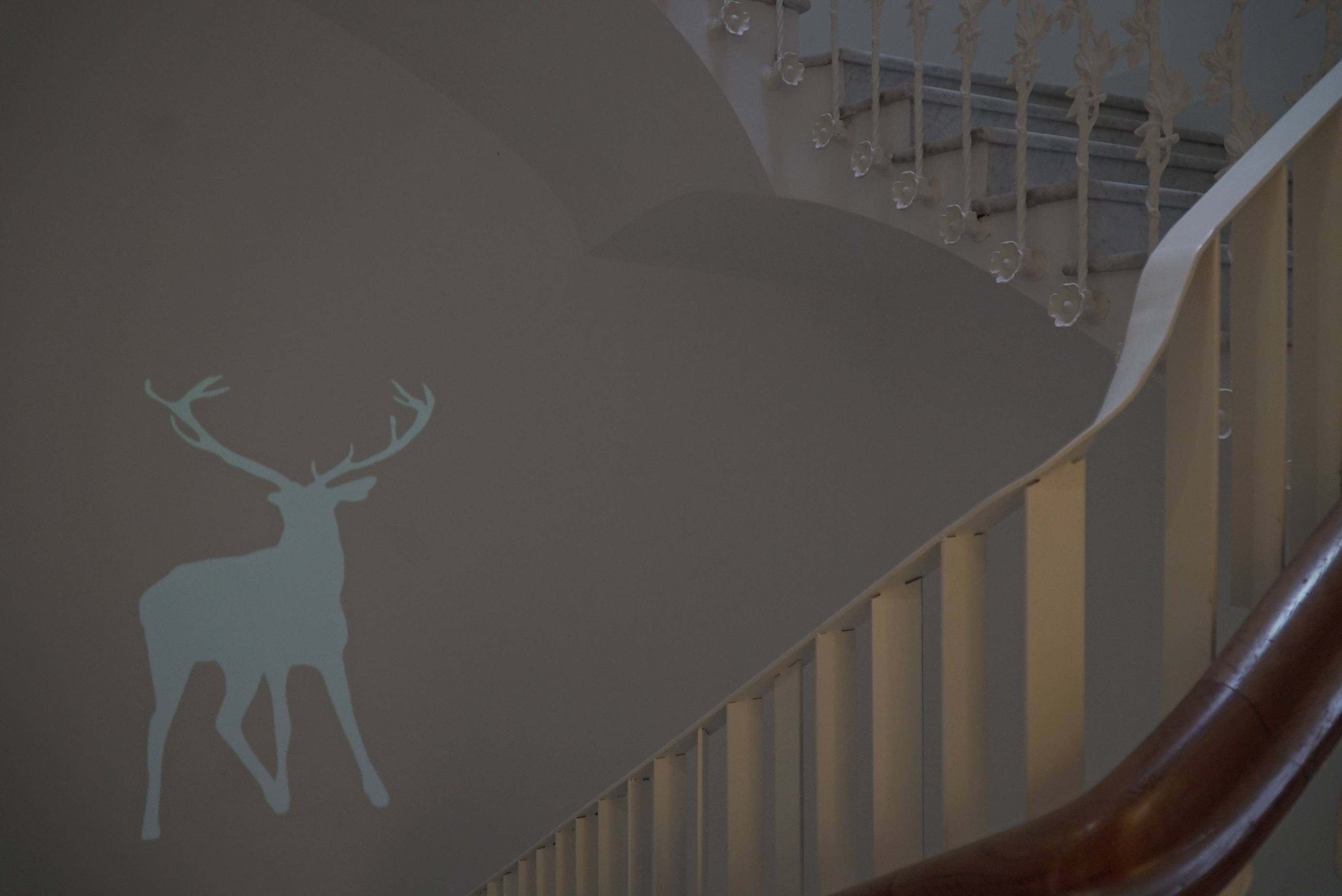 “Chapel for a wild thistle in Bloom” (First floor)

The gold leaf has a direct relationship with symbolic sacredness: what it welcomes among its leaves is what is culturally important, what is religious, what helps us to connect with something that transcends our daily experience.

Gilding, in the manner of a chapel, the space of a house to hold the portrait of a small wild thistle, is an exercise in recovering the link with natural beauty, which so often becomes imperceptible to our gaze.

Monet’s garden in Giverny was a Project of individual happiness: Monet built next to his house and studio a garden of splendid diversity, which served for his vital enjoyment as well as motive for his paintings. But contrary to what the paintings of the Ninfeas might suggest, it is not a very extensive garden, it is rather recollected, folded back on itself: an intimate garden that his paintings expanded to a planetary dimension.

With “Giverny’s Memory” I wanted to recover this close dimension, to bring the garden into the house, working on the idea of the “interior garden”.

All plant life, in its magnificent diversity, has a common origin, a biospheric energy that feeds it. The idea of the “tree of life” that from the roots feeds with its sap, through branches and fine veins, a world of flowers and fruits, is a great metaphor of the nourishing nature.

Otherwise the painting is nourished by this same vital energy, which in its history has represented nature and all its sacred biodiversity. 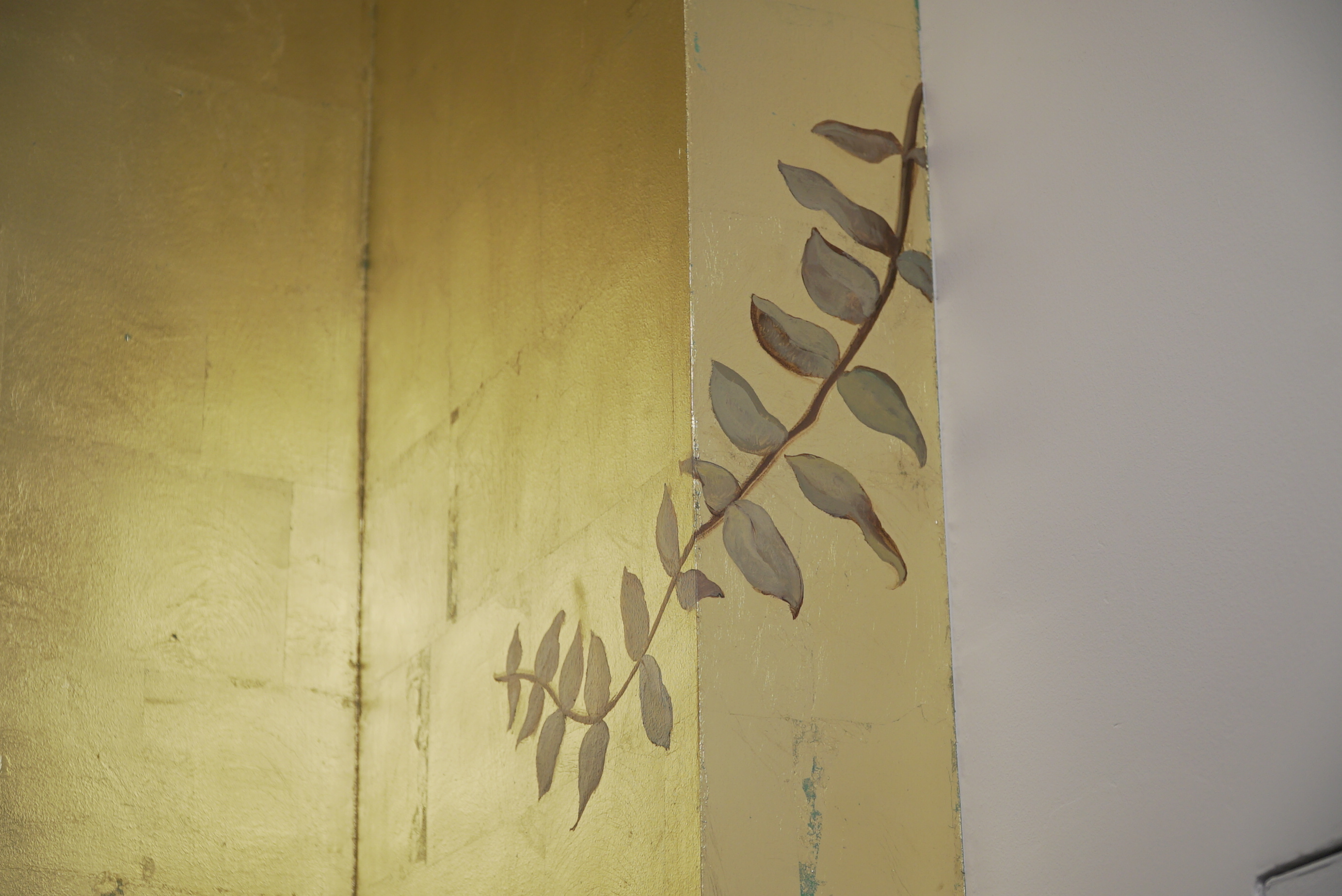 “In the spiral of steps”

Occupying the space of a stairwell implies thinking about progression, which is similar to the growth of plants. The fact that Ausiàs March lived in this building led me to consider a similarity between the growth of a plant and a poem. Just as one branch begets others, one sentence leads to the next.

To climb a flight of stairs is to take a helical path like the spiral path of vegetables. It is not a question of representing this analogy but of being inspired by it and embracing the forms present in this place.

The texts that extend the branches are aligned with the work of the poet Ausiàs March, with the historical city, while at the same time they are in line with the place itself, with our present time with its torments, in search of beauty and light. 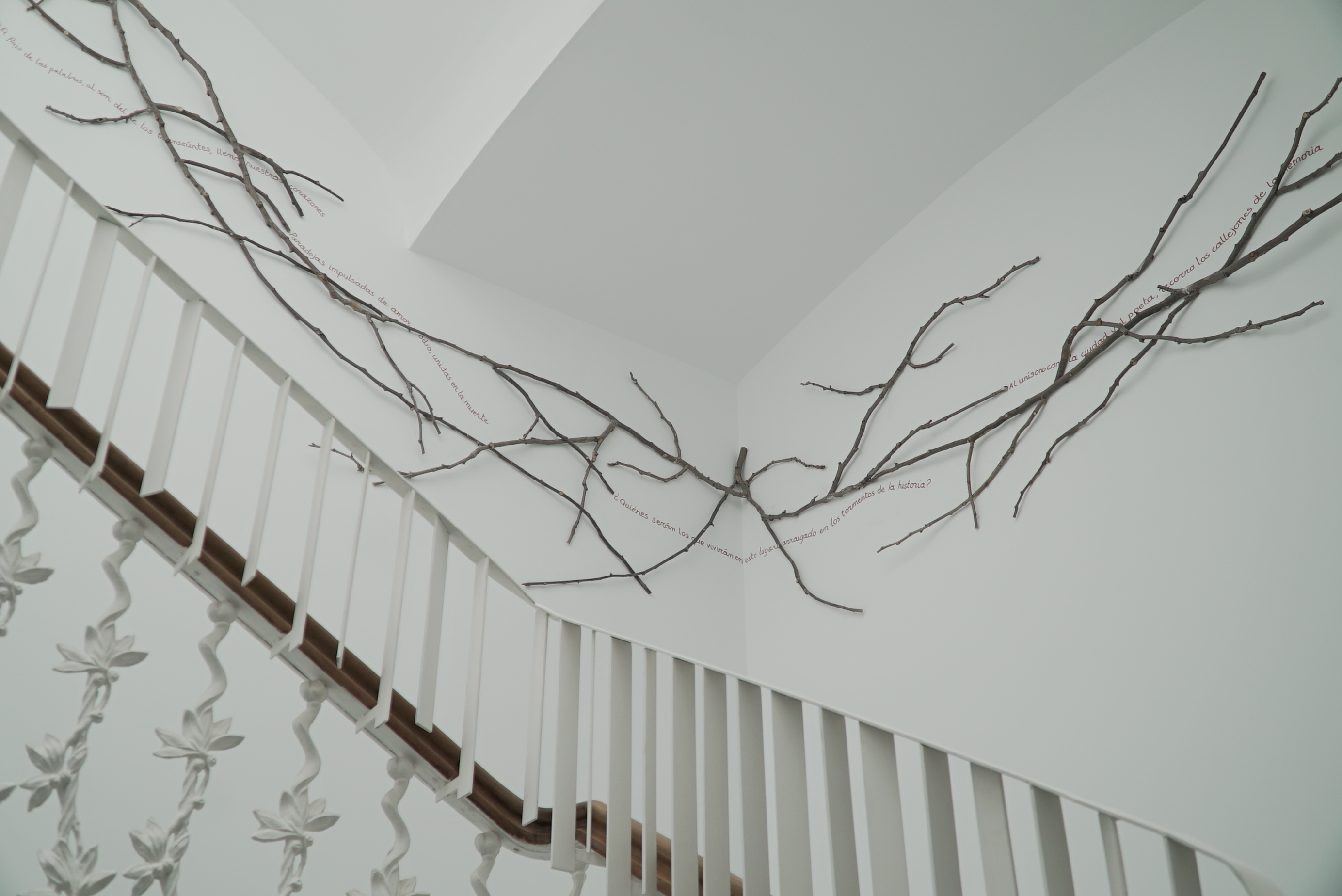 The work I present for the fourth floor of the building is a discreet and silent installation under the title Gazelle 407. The gazelle is a classic metric form of Persian love poetry. The great poet Hafez (Shiraz, 1325-1389) took it from his predecessors to bring it to an overwhelming excellence of symbols and metaphors, while moving earthly love into the realm of mystical love.

I have taken the path of ascent of the stairs, passing through the deer and branches of a forest recreated on the second and third floors, to reach a place at the end of the building, where I can pause for recollection and introspection. Under the light of the skylights, the white ceramic and paper works present incised and veiled writings, belonging to the verses of Hafez. The porcelain tablets appear without glazes or ornaments and the paper rolls accompanied only by ink, as if going up the stairs we were stripping ourselves of everything little by little until we reached the austerity of the language and the silence that lies beneath it.

During the installation the sound of the recitation in repetition of the poem in Farsi accompanies the rest of the work. 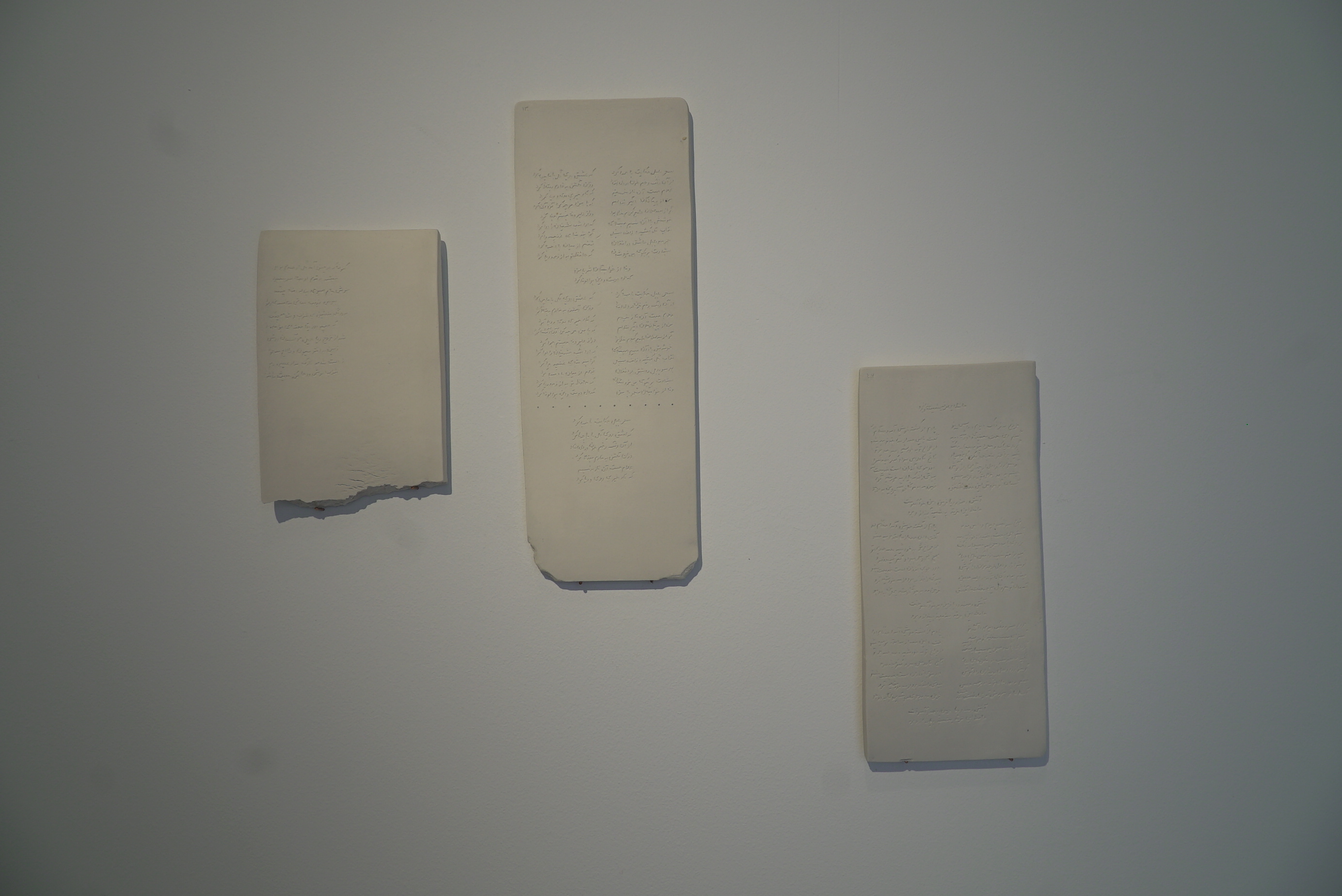 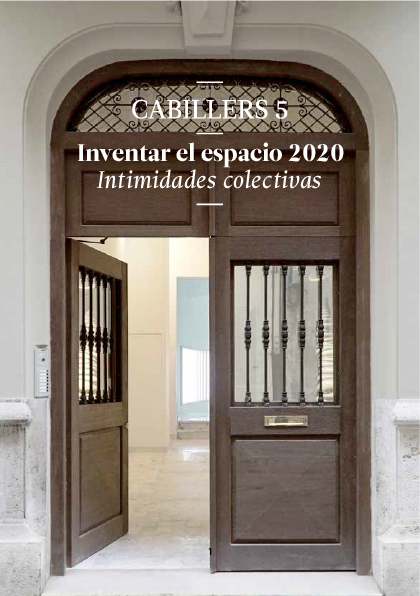